US plastic surgery is enjoying a boom, despite the economy. Find out which cosmetic procedures and treatments are going and down 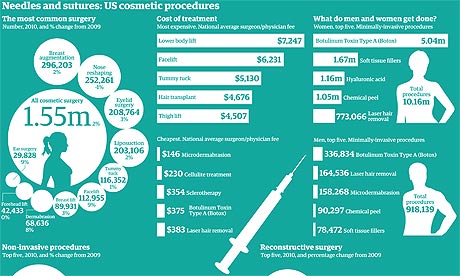 Plastic surgery is big business in the US – and the latest figures show that despite the recession, that business is booming.

The numbers are up 5% on the year before – and a 77% increase on the year 2000. The vast majority of those procedures are defined as "minimally invasive" – some 11.6m of them, in fact.

These figures, from the American Society of Plastic Surgeons, give us a real insight into an industry which is still a lot smaller in the UK.

Here are some of the key facts:

Reconstructive surgery – where someone is recovering from an operation, accident or illness, is also substantial – 5.3m treatments in 2010 (in addition to the 13m cosmetic total), up 2% on the year before. Four million of them are for tumour removal, including skin cancer.

We’ve extracted the key data from the report – and you can download it below. You can also compare it over time.

What can you do with it?